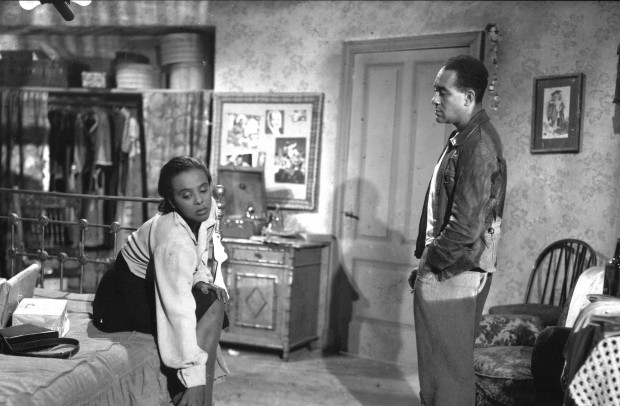 Sangre Negra (Native Son, 1951) was heavily censored on release in America; just six weeks after real life events that came a little too close to some of the film’s confronting and contentious racial content. Bigger Thomas (Richard Wright), living in abject poverty with his family in the Chicago slums, is offered a job as a chauffeur for an affluent white family. His past reveals some petty tire theft but he assures his new employers that he has turned over a new leaf and won’t be causing any trouble.

Taking him to a black neighbourhood nightclub, Bigger must listen to Mary croon “All coloured people are so talented,” as his girlfriend Bessie Mears (Gloria Madison) sings the blues. Mary follows up with an assurance that, “One day, coloured people won’t have to sing only the blues”. She and Jan want to help Bigger, and they provide him with a selection of political literature – Mary will happily “explain it to him” – so they can kick start his process of social, political, economic and racial emancipation.

But, as it turns out, white people can’t just reverse hundreds of years of racial inequality and heal the damage done by American slavery with a pamphlet. When Jan leaves Bigger to take a drunken Mary home, Bigger is in trouble: he is terrified to help her to her room – what if her parents were to find this black man pawing an intoxicated white woman? – but Mary insists. No matter how innocent, however, Bigger knows that such a deed will not go unpunished. Mary continues to call him her friend and to ask for his help getting to bed and Bigger, still in a position of subordination, sees no other option than to oblige. Sweating and under the strain of those very hundreds of years of racial inequality and still stuck in a position of enslavement, Bigger does as the white woman asks, only to have her slurring her words, entertained by his ‘wiry’ hair.

What happens next is both tragic and painful to watch. Due in part to the panic of the situation and also to an innately human desire for self-preservation, Bigger smothers Mary, trying to quieten the drunken rambling that threatens to expose his presence in her room. The death is not treated lightly and there is no defence for murdering a defenseless victim. However, the polemic that follows focuses on the complexity of why such an event occurred in the first place.

Things only get worse for Bigger as he sets in motion a series of even worse decisions, starting with getting rid of the body, and continuing with a poorly orchestrated financial swindle. Sending a ransom note to his boss, Bigger’s is a view to making out with a chance at a better life for him and Bessie before the family or the authorities pick apart his faked kidnapping and discover the bits of vertebrae and charred jewellery belonging to Mary Dalton in the downstairs furnace.

Though some of Bigger’s actions may seem implausible to a privileged viewer like myself who can’t imagine how making things worse could ever seem like a way out. But, and what the film is doing, is showing us how desperation and depravity cannot be fixed by those of us who only understand it theoretically.

The dialogue, at times, is clunky and the delivery is not always convincing. But this is not a film whose place in history belongs solely to the dramatic arts. Captured exquisitely in light and shadow, with heart and soul, and all of the devastation that humanity allows, Sangre Negra is a film that wants to change the world. Curiously, it is not an American film. Director Pierre Chenal fled France after Nazi invasion and moved to Argentina in 1942. Luis Saslavsky, who had seen his movies from the 1930s at Cine Arte in Buenos Aires, helped him establish himself in the Argentinian film world. But he returned to France after the war where he developed the idea for this film – a novel that had already been adapted for the stage under the direction of Orson Welles. Chenal couldn’t shoot the film in the US and Europe was not interested in its story. Chenal returned to Argentina. Some exterior shots were taken in Chicago and the rest was filmed in Argentina. Jean Wallace accepted the role, despite its inflammatory content during the blacklist period.

Cut, reassembled and, in this instance, presented on a stunning 35mm film print, Sangre Negra is a strange, sometimes amateurish yet absolutely overwhelming for its piercing commentary on human injustices. An unlikely treasure and an unforgettable cinema experience, this may not be a newly ‘found’ movie, but it is a rediscovery of grand proportions.