THE JÄGERSTÄTTER CASE – A MONOLOGUE 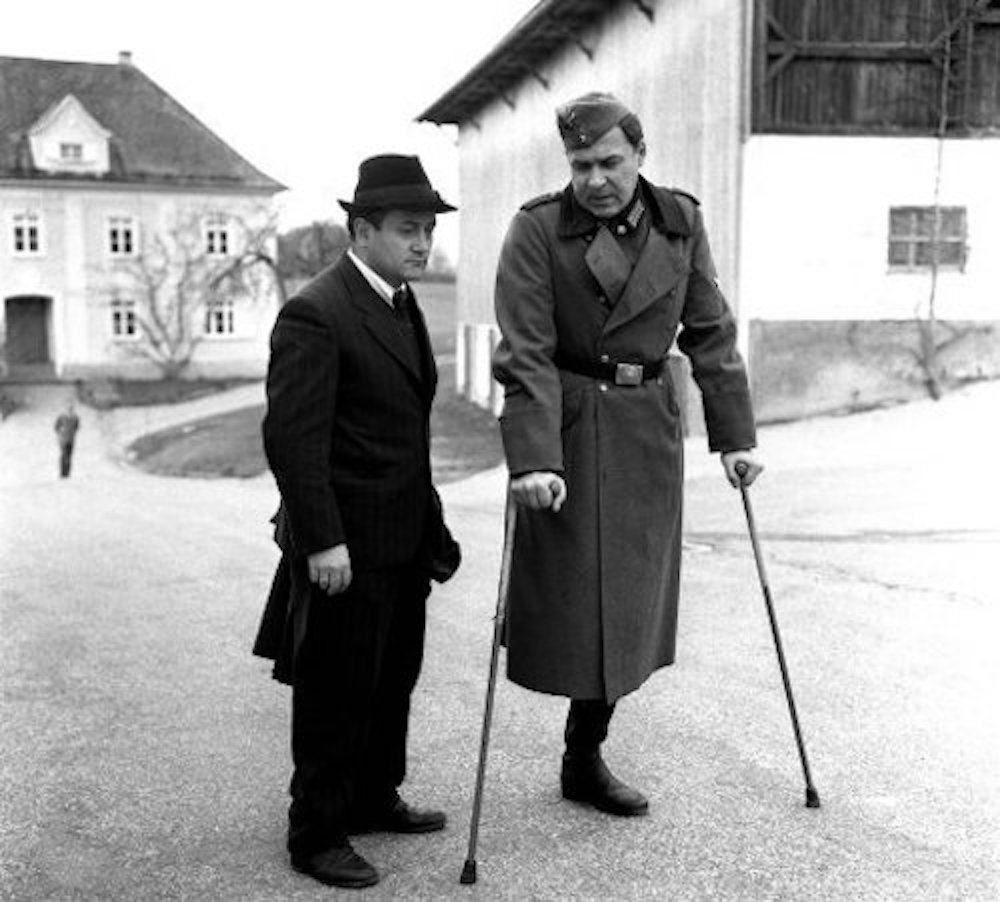 The Upper-Austrian farmer and sacristan Franz Jägerstätter refused military service in 1943 on religious grounds. He was sentenced to death for “decomposition of military strength” and executed on 9 August 1943. The groundbreaking television film, Der Fall Jägerstätter / The Jaegerstaetter Case (1972) from Axel Corti, is a rare attempt at exploring dissident life in Austria during the Third Reich.

“The element of decomposition of military service exists if anyone publicly requests or incites someone to refuse to perform official duty in the German or an allied Wehrmacht, or otherwise publicly paralyses or decomposes the will of the German or allied people to assert themselves for military purposes.”

For he still exists, the farmer, who on Sundays stays peacefully under his apple tree and reads instead of getting drunk in the inn. The petit bourgeois who sacrifices the excitement and noise of the racecourse for a noble spectacle or just a quiet afternoon. The worker who, instead of filling the streets with mean songs and silly chants, goes out into the country or watches the sunset from the city ramparts. They all place a nameless and unconscious but not unimportant log in the one great flame of humanity. And on that day we are at a funeral, we see Franz Jägerstätter (Kurt Weinzierl) together with the village priest celebrating the things that Catholicism has planned for the occasion. We see and hear the restrained sobbing of the rural women, headscarf tied tightly under their chin. The old men wearing hats, and blowing their nose now and then as the clouds pass over the small church. The priest nods and says, “Bear your grief in quiet mourning, for leaders and people, for God loves the brave.” The coffin already in the ground, the camera with it and so we look up, and with a loud crumbling noise the earth falls on the wooden lid.

And Jägerstätter describes a dream: How everyone stood there waiting for the train, and everyone cheered and wanted to go with it.

They all wanted to take the train, and yet it was a bad dream. Because as much as he, Jägerstätter, could explain his dream in this one, this train is going to hell! None of them cared. The rejoicing continued. But Jägerstätter is also clear, he is far from crediting progress only to himself; he is convinced that a certain high level of all spiritual life must have entered even the lowest of people, so that the mature citizen would be able to say things that go a step further. Sometimes even into the great night of the unknown, which is surrounded by the same darkness. 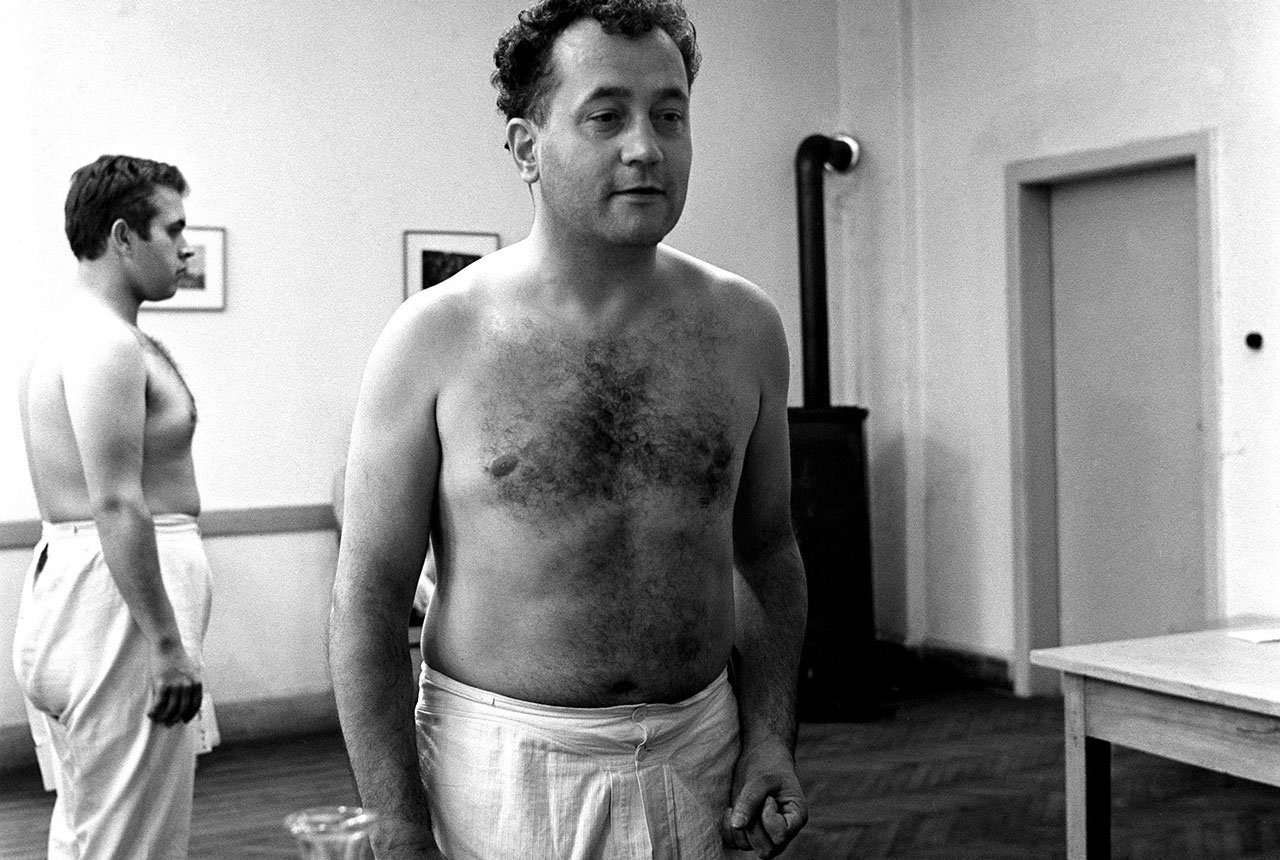 “But a man,” says the priest, shaking his head, clutching the wrought-iron gate to the cemetery, “a man under duress, he is not responsible after all! Are you, hunter-sergeant, smarter than all of them, even your priest!?” He still looks at the good citizens as they pass him by in their grief: “Mr. Jägerstätter, you see things so distorted. Believe me, your own responsibility, that lies only with you at home.”

For patterning, the camera floats past the male bodies, describing a tour, following an individual who takes off his shirt, carries on and gets his shoes unlaced by someone. Another one slips out of his coarsely woven trousers and carefully places the clothes on a wooden bench. A damp cough and blow, a realism that hurts in ears and eyes. One senses Cortis’ radio play past, since the sounds are clear and constantly tell their own story. The officers in their uniforms in contrast to the half nakedness of those called up for military service. Corti has another sentence which whips us, relentlessly: “Do some squats! Done! Good, next!”

Until the camera lingers with Jägerstätter, who speaks softly: “I hereby pronounce my conscientious objection to military service. My conscience as a Catholic…”…” He becomes more eager, speaks faster and faster, but does not trip over his tongue. Then the officer looks and raises his eyebrows. “Ah, a bee researcher!” Subtle laughter all around him.  “They’re just giving us trouble.” Can it be said that at some point in his development Jägerstätter tried to separate the manifesting greatness from his name and make it anonymous by distributing it over a thousand nameless people people when he sees in them silent but unconscious collaborators in a greater work and intention?That he has tried to let them participate in a work which, in his opinion, is the only real work of humanity and which is called the “search for truth”? And this is and remains his work.

If you slam the window neatly and with force, only deliberate noises and also the noises outside will remain (Sound: Kurt Schwarz and Franz Speckmayer). But inside it continues. One can also say that Jägerstätter does not forget the experiences of the earlier days. He knows that most people are unhappy and, far from their soul, live in the darkness of chance, but he also believes that it is still better to talk when you speak, then you are with yourself and language gives you a first weapon, if not the last. Speaking as if everyone meant the same thing, as if everyone was happy, because only in this way is progress possible. And even if the last truth may be mysterious and cruel, our soul is itself a piece of that truth, only if we extend its range. The mystery that now dwells dark and threatening outside of us will overflow into it and eventually fill us more and more. Jägerstätter was never a coward, he always spoke, the villagers say. Ah, he was so agile, and yes, he was never a coward! He was good at the Bible. Everyone seems to have been fulfilled. But why wouldn’t he be in the inn? The Major is also confused by this bee researcher. Is he dealing with an intellectual? We must be careful. “Drinking and playing cards,” says Jägerstätter in his chair, “it’s just that I don’t like to waste my time, and everyone should know for themselves what they want to do with their time.

It should be possible to say that only what people really want actually happens to them, because even if we have a very small influence on some external events, we have an almighty influence on what will become of these events within ourselves. And what is he like, he who does not take up an event, who does not make it completely his own, who continually disarms fate by conquering it at every moment? The focus of events is thus not shifted from the unknown to the known, it only changes location, it is no longer found in the mystery that surrounds us, but in the one we carry within us. And this seems to be the great basic law of life’s view of life: internalization, concentration of all powers in our soul, expansion of this soul into a world that is more powerful than that sinister world of fate that has been threatening and hostile to man for so long. To give this destiny to mankind, in short, is a work of love, this is the task that always seems clearer than the task of a life, a life that is close to the sources of a wisdom that is accessible to all and that can perhaps still make everyone happy. 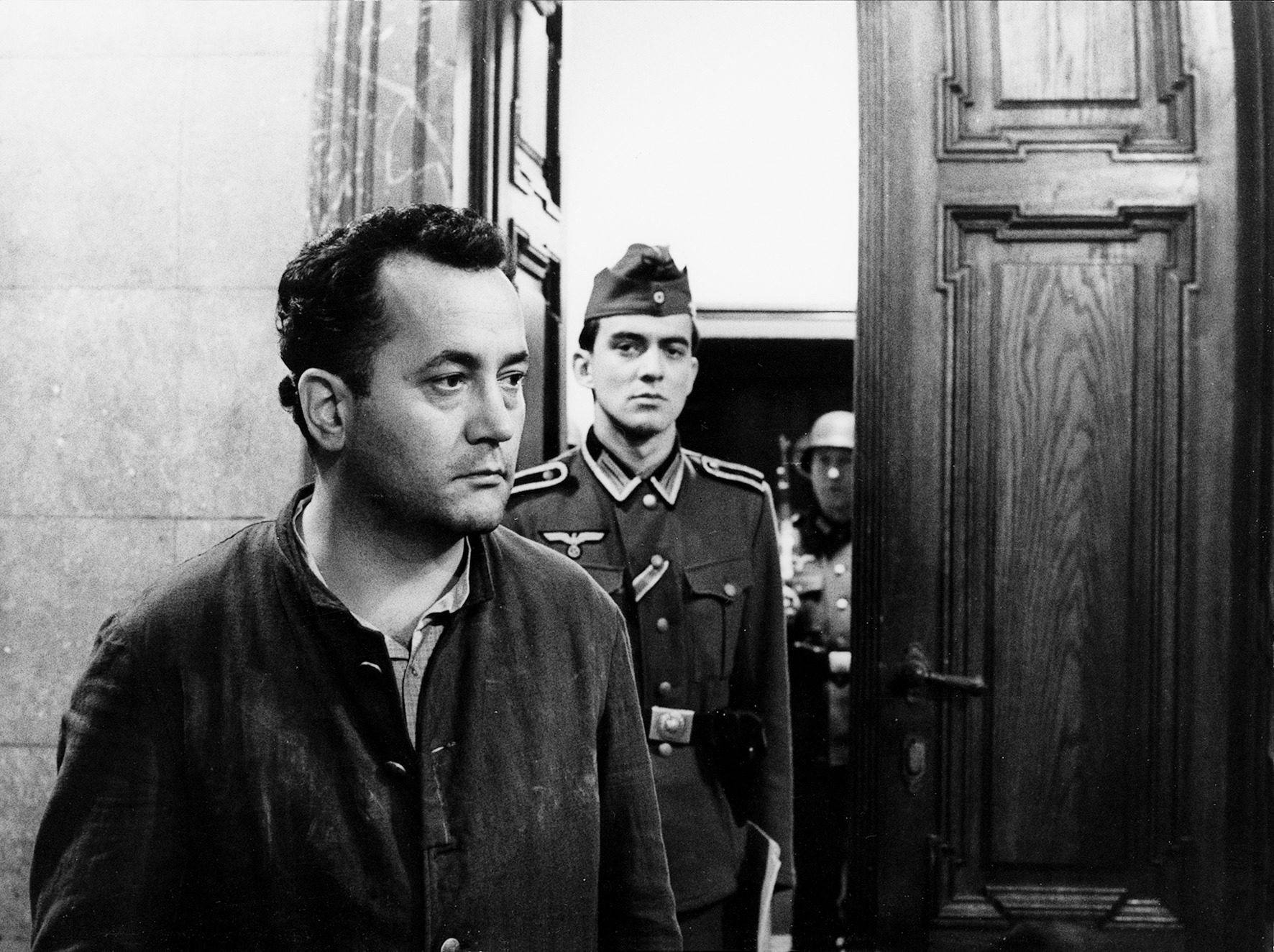 “And you see, I, as your Major, am thinking of all the things you cannot think of, indeed cannot think of at all. Your family, your village. Look, I’m putting you in a medical unit. Nothing can happen to you there. I have a wife and children too, you know.” Besides those who are suppressed by people and circumstances, there are indeed other beings who are gifted with an inner power to which not only people but also the surrounding events submit. They know about this power; and this power is also nothing other than a self-consciousness that could expand far beyond the limits of ordinary consciousness. And knowing oneself does not mean knowing oneself more or less in the present and the past; the beings of whom I am writing here possess this power only because they know themselves in the future.

That one night in a cell: an Alsatian (Claude Bertrand), a Berliner (Wolfgang Kieling) and an Austrian. Yes, the Austrians threw flowers at us, and cigarettes and chocolate! Corti connects the lines of sight, we always see individual persons looking directly out of the picture (film editing: Erika Geiger). But they are not looking at the viewer. They are talking that night, everything will not end so badly. Maybe ten years? Is it grace to see the truth and, what is grace? And you, Slayerstätter, you can’t even pass judgement!

The camera goes from close-up to full shot: “I will not be complicit in this war.” And the priest visits the wife, tells her how things are in Berlin. But he also cuts the bacon, because: the death sentence was to be expected. The priest eats slowly and tries to persuade Jägerstätter’s wife Franziska (Julia Gschnitzer). He wants her to come with him and then talk to her husband. She should talk into his conscience. Because at home, in his village, he has a responsibility. And she will look at him like this: “Don’t worry about us, Franz, we’ll get by. I’m sure we will.” What’s he gonna say? Who’s judging what crime here?

Whoever commits an injustice shakes above all the trust he places in himself and in his fate. He has lost the clear sense of his personality and his power. He no longer clearly distinguishes between what he owes to himself and what he had always owed to the corrupt co-workers who caused his impotence. Therein lies the danger that events may find us scattered, idle and powerless. At this moment something strange comes into our lives that we can no longer overlook, and today or tomorrow the seeds that were planted when we were apparently asleep will be sown.

The opinion and the judgement. And war is always so unjust… Jägerstätter writes down a few lines until he is taken and then it goes very quickly. The way to the guillotine is short and turns your stomach while looking at it. The scene breaks down a thousandth of a fraction of possibles experiences this movie is about.

And the voices do not stop.